Redwood bar is hidden in the Bergstraße 25 in Berlin Mitte close to Rosenthaler Platz. In tradition of US American speakeasy bars it is hard to spot from the street and is dark inside. The bar was opened seven years ago, but desipte this fact even some of the residents of the Bergstraße wonder sometimes as thez suddenlz discover it right under thez nose.

Despite it’s location in the heart of Europe the interior and history of this bar point to the USA. The interior is minimalistic and centered around the huge piece of Redwood used as a counter. Also the name itself derives from this astounishing piece of history, which was shipped from California as special order from the owner – Kevin Brown. The rest of the design does everything to put the central piece into the light it deserves. It is hold in rigorous minimalistic industrial design with additional mirror above the shelves, several lights and a wall tapestry, which conects to the only piece, which breaks the rigour of the design – a poster of the acid rock band DeadHeadz in the window.

The athmosphere of the location is friendly and despite it’s hidden status it is well visited even on Wednesday evening. This is a concequence of the athmosphere, but also of Redwoods fame, as here you can find Berlins finest classical cocktails mixed in the tradition of Prohibition era. The menu has several cocktails with twist. The classical cocktails are shown on the front page of the menu in a table with vertical dry-sweet axis and horizontal list of alcohol, the cocktail is based on. These cocktails are also listed on the back again with all ingridients used.

The cocktails are strong, small and served with water. The taste is nuanced and well balanced, however some of the cocktails with twist are not for everyones taste (e.g. Susanne with a strong kick of selery). Monika on the other hand had all the layers of taste promised by the – menu: Backgroud of Oloroso Sherry overpainted with dominant raspberry, touched by marachino and orange, and rounded up by artichoke. Nonetheless our lasting discussion, if we taste the artichoke there or just imagine it. The classic cocktails (we tried Diamondback and Last Word) are exquisite in taste and mixing and hold up to the promise made by the ambiente. 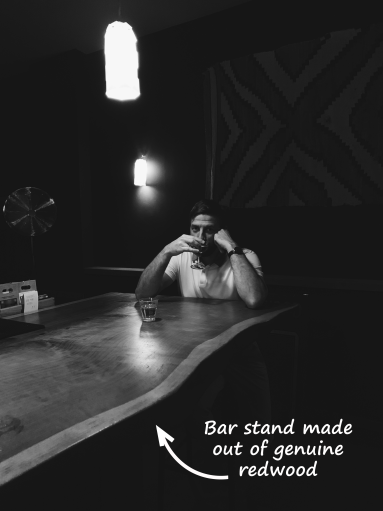 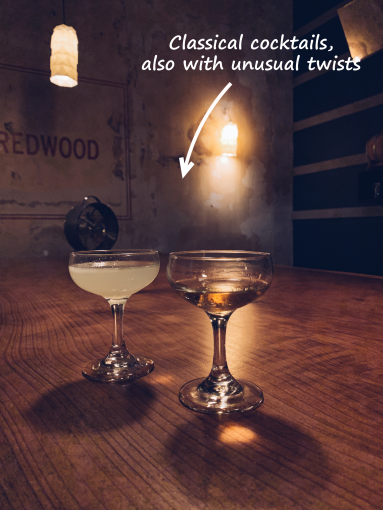