In the Bergstraße we visited Redwood bar, which is designed around a counter made of a huge piece of Redwood from USA, California, and drinks based on strong spirits in prohibition style. Continuing the topic of wood and alcohol connected across Atlantic ocean, we discussed the whisky and bourbon barrels. Specifically, why in some regions in Kentucky bourbon gets stronger over time, as usually the amount of alcohol decreases with time.

Redwood bar is hidden in the Bergstraße 25 in Berlin Mitte close to Rosenthaler Platz. In tradition of US American speakeasy bars, it is hard to spot from the street and is dark inside. The bar was opened seven years ago, but even some residents of the Bergstraße wonder sometimes as they suddenly discover it right under their nose.

Despite its location in the heart of Europe the interior and history of this bar point to the USA. The interior is minimalistic and centered around the huge piece of Redwood used as a counter. Also, the name itself derives from this astonishing piece of history, which was shipped from California as special order from the owner – Kevin Brown. The rest of the design does everything to put the central piece into the light it deserves. It is hold in rigorous minimalistic industrial design with additional mirror above the shelves, several lights and a wall tapestry, which connects to the only piece, which breaks the rigor of the design – a poster of the acid rock band DeadHeadz in the window.

The atmosphere of the location is friendly and despite its hidden status it is well visited even on Wednesday evening. This is a consequence of the entourage, but also of Redwoods fame, as here you can find Berlins finest classical cocktails mixed in the tradition of Prohibition era. The menu has several cocktails with twist. The classical cocktails are shown on the front page of the menu in a table with vertical dry-sweet axis and horizontal list of alcohol, the cocktail is based on. These cocktails are also listed on the back again with all ingredients used. 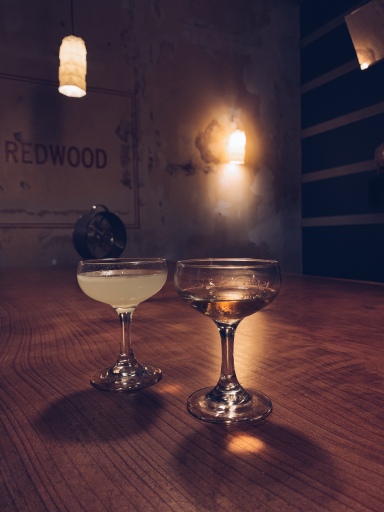 The cocktails are strong, small and served with water. The taste is nuanced and well balanced, however some of the cocktails with twist are not for everyone’s taste (e.g. Susanne with a strong kick of celery). Monika on the other hand had all the layers of taste promised by the menu: a background of Oloroso Sherry overpainted with dominant raspberry, touched by maraschino and orange, and rounded up by artichoke. Nonetheless our lasting discussion, if we taste the artichoke there or just imagine it. The classic cocktails (we tried Diamondback and Last Word) are exquisite in taste and mixing and hold up to the promise made by the ambience.

Redwood is mostly common in the forests of Northern California. Its use is limited as these giant trees are strictly protected. However American wood (mostly oak) is used to manufacture bourbon and whiskey barrels. The barrels used for bourbon aging can be made from fresh wood. The barrels shipped to UK for traditional whiskey aging must have been in use [1]. In this way the tradition of making whiskey crossed the sea to be supplied with the barrels in return.

Nowadays plenty of different whiskeys exist – from Scotland and Ireland, but also from USA, Canada, Germany, India and Japan. The detailed process of making whiskey can be found e.g. in [1]. In the last step of the process whiskey is stored in barrels for several years or even decades.

The degree of original alcohol content of the spirit filled in barrels is usually 63.5%. And it decreases with time. This decrease is caused by diffusion and is called “Angel’s share”, which is also title of a great English movie. Part of the liquid is absorbed by the wood of the cask and diffuses through walls. It evaporates then from the barrel. Alcohol content decreases by a rate between 0.2 and 0.6% as liquid level falls by 2% annually.

However, in some barrels the alcohol content increases over time! It does not depend on the barrel though, but mainly on its location. Bourbon – another kind of whiskey- is produced in Kentucky (in other places, too, but we will skip this for now). And there is a huge difference in climate between Scotland or Ireland as whisk(e)ys country of origin and Kentucky. So why does in one region the alcohol content decrease whilst in another it increases?

Diffusion is spontaneous intermixture of materials, if a non-equilibrium state (difference in concentration) is given. Now the difference of concentration (for intermixable materials) decreases over time and vanishes in the end. E.g. if we have two glasses – one full of water and another full of alcohol, which are separated be a wall and you remove the wall – the fluids will intermix. The starting concentration of 100% water and 100% alcohol will turn in the end to a 50%/50% alcohol-water mix everywhere in the volume.

In Kentucky the humidity is between 56% and 80% and therefore the angel’s share is in general higher there [3]. The liquid content in the cask can decrease up to five time faster than in Scotland and therefore bourbon can rarely age as long as whiskey. The difference between the alcohol content in the air and alcohol content in the cask is the same as in Scotland, so in a simple model of diffusion the diffusion rate of alcohol through a wall of a barrel will stay the same in Kentucky as in Scotland. However, the humidity is up to 1.6 times lower in Kentucky. If we assume linear dependence between the humidity decrease and water evaporation, we will get a factor of 1.6 faster evaporation in Kentucky with humidity at 56% and in Scotland at 90%.

Of course, for simplicity reasons, we have made a very straight forward assumption here and considered the factor of humidity only. We didn’t take in account differences in wood, temperature, properties of storage rooms, etc. Also humidity can vary in the same place (Kentucky and Scotland are large areas with very different seasons) and for that reason the alcohol content increases in some bourbons from Kentucky only. But even as a result of this simple assumption you can see that the product of spirit manufacturing depends not only on technology, but also on the place, the climate in this place and physical processes involved. This brings challenges to adapt the production process, but it brings also opportunities for new and different tastes. Next time you go for tasting you might want to try whiskeys of same age and similar process from Scotland, Ireland, USA, India or Japan – just to taste the climate so-to-speak.

We described one of the best bars in Berlin – the Redwood bar and discussed the diffusion of alcohol and water through the barrel walls. The increase of the alcohol content in some regions in Kentucky opposite to the common “Angel’s share” known from Scotland and Ireland was explained based on the simple one factor model using regional humidity.